We are in the midst of a revolution. We’ve had 20 years of massive self interest that’s gotten us into a lot of deep trouble. The revolution is about reorienting toward kindness as a way to make a difference. Will you join us?

About Kindness Is Contagious 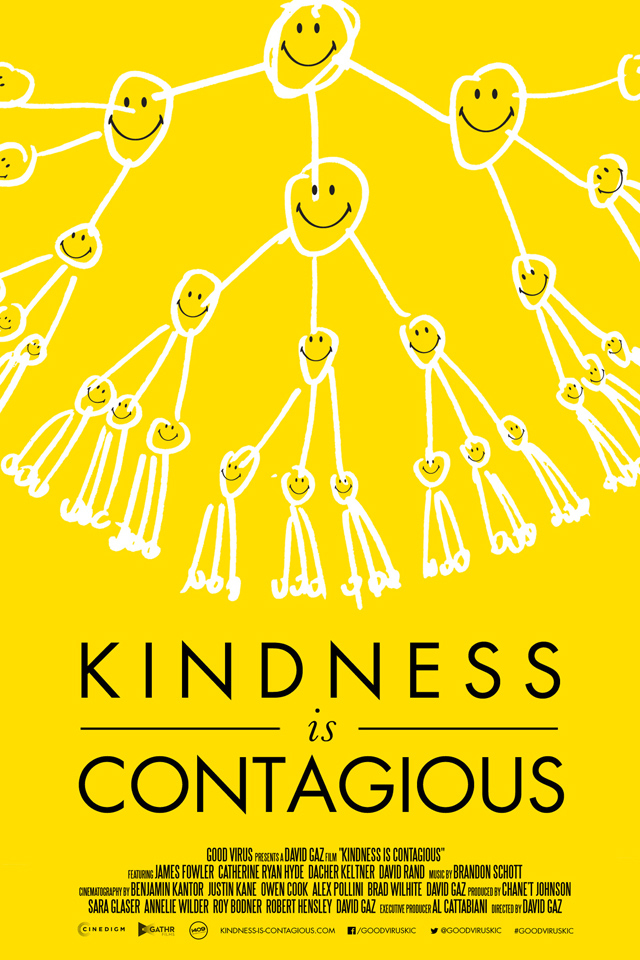 Kindness Is Contagious is a feel-good documentary, narrated by Catherine Ryan Hyde, the best selling author of the novel (and film) Pay It Forward. It’s a film all about being nice and the benefits of being nice. Kindness Is Contagious profiles cutting-edge scientists and best-selling authors from Berkeley to Harvard and everywhere in between as well as real life people from all walks of life whose lives illustrate their incredible discovery:

It all began with an article about James Fowler and Nicholas Christakis and their research concerning the viral nature of kindness. Fowler and Christakis demonstrated that if you are kind to one person, they will be kind to four other people, and that each of those four people will be kind to four more people, and so on and so on… eventually circling back around to you again. Showing in fact that Karma may actually exist in the scientific sense.

We asked people from all walks of life one deceptively difficult question:

What is the nicest thing anyone ever did for you?

What Is The Nicest Thing That Anyone  Ever Did For You?

Here’s your chance to make a real impact. Encourage friends and family to come together for kindness in your community. It’s not just a movie, it’s a movement.

Wherever you’re holding your screening – here are some useful tools to make sure you have a full house and a special night:

How to use Kindness Is Contagious For Fundraising (PDF)

Host a theatrical screening in your community at no cost to you:

Kindness Is Contagious is a great way to open up a dialogue about the power of Kindness in your community. We’ve teamed up with an organization called GATHR (who are really nice!) to make it very easy for you to bring Kindness Is Contagious to your local theater or a venue of your choice at absolutely no cost to you.

GATHR uses a “theatrical‐on‐demand” model. You request a screening and they coordinate with the theater for you. You won’t have to pay any screening room rental or exhibition fee – all you have to do is promote the film and get people to reserve tickets. But here’s the thing, we need a minimum number of people to buy tickets to get the movie booked – to “tip it”.  So we need your help to “tip it” in your neighborhood.

1 – Check to see if a screening is already scheduled in your community by entering your city on the map to your left.

2 – If nothing is close by then,using the buttons below, either GATHR your own Theatrical screening or if you’re not interested in being the host, simply sign up to be notified when someone else schedules one.

3 – Once your request has been approved, you’ll get an email confirming you as a Captain for Kindness Is Contagious and you’ll get a link to begin promoting the specifics of your screening.

Make a difference.
Host a screening of Kindness Is Contagious in your community at no cost to you.

Kindness Is Contagious is a great way to open up a dialogue about the power of Kindness in your neighborhood. Click Here to learn more, or click the button to get started.

Wherever you’re holding your screening – here are some useful tools to make sure you have a full house and a special night:

How to use Kindness Is Contagious For Fundraising (PDF)