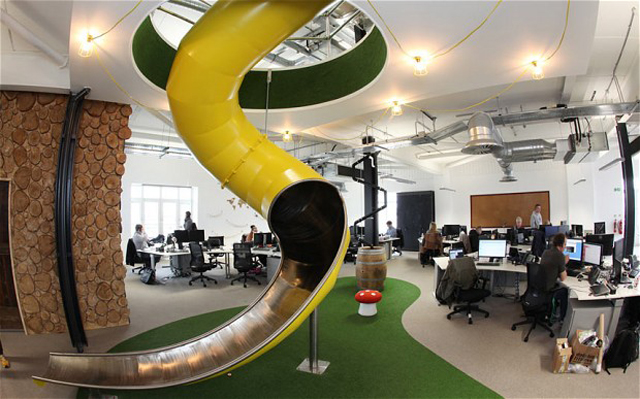 Currently it’s not economically viable to do many jobs in America when labor is cheaper overseas. But maybe we can compete by thinking differently. Maybe it’s time for a new kind of work, a more rewarding kind of work that people will willingly do for less money and thus making american labor more competitive internationally. If people put as much thought into making work rewarding as they do with simplifying tasks, what would the results yield?

Could factories and call centers be made fun to work at? Or have educational components?

Read economic theorist E. F. Schumacher thoughts about wealth and money in his seminal 1973 book Small Is Beautiful: Economics as if People Mattered

The consequences of these attitudes both in theory and in practice are, of course, extremely far-reaching. If the ideal with regard to work is to get rid of it, every method that “reduces the work load” is a good thing. The most potent method, short of automation, is the so-called “division of labor”… Here it is not a matter of ordinary specialization, which mankind has practiced from time immemorial, but of dividing up every complete process of production into minute parts, so that the final product can be produced at great speed without anyone having had to contribute more than a totally insignificant and, in most cases, unskilled movement of his limbs.

The Buddhist point of view takes the function of work to be at least threefold: to give a man a chance to utilize and develop his faculties; to enable him to overcome his ego-centeredness by joining with other people in a common task; and to bring forth the goods and services needed for a becoming existence. Again, the consequences that flow from this view are endless. To organize work in such a manner that it becomes meaningless, boring, stultifying, or nerve-racking for the worker would be little short of criminal; it would indicate a greater concern with goods than with people, an evil lack of compassion and a soul-destroying degree of attachment to the most primitive side of this worldly existence. Equally, to strive for leisure as an alternative to work would be considered a complete misunderstanding of one of the basic truths of human existence, namely that work and leisure are complementary parts of the same living process and cannot be separated without destroying the joy of work and the bliss of leisure.