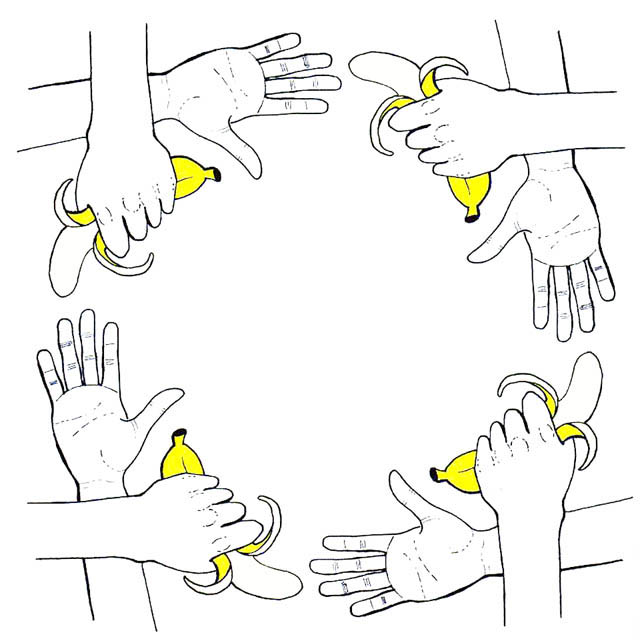 On the island of New Britain, anthropologist Jane Goodale witnessed a group of Kaulong children play a game after they had been given one banana each. Their play, however, did not resemble the competition that is common in Westernized societies. Instead, each child proceeded to eat half of their banana, then offer the remaining half to another child who would offer his uneaten half in return. They would then cut this portion in half, eat one piece, and trade the remaining quarters. The children proceeded in this nature for five trades, finally eating the last bite.

The children were practicing the collaboration that will be a necessary skill through their entire lives. While many pre-schools and kindergartens continue to teach sharing, in Western society it has become a virtue instead of a requirement. Our modern states all developed from tribes over time, leaving behind many of the behaviors that were once common. Development of a tribal society into progressively larger entities, ultimately statehood, cuts the close cooperative bonds that members of tribes have. This tribal bond may appear utopian to outsiders, but it is actually a pragmatic way of survival. A group of 30-70 people with a small farming area and some hunting and gathering need to pool all their resources.

As previously uncontacted groups enter capitalist democracies they often react to the comparative plenty by consuming in patterns that we would recognize—increasing food consumption, concern with trendy clothing, and acquiring items of their own in order to better their own lives. In prosperous, large countries such as the U.S. hallmarks of success include independence and conspicuous consumption. “Co-dependent” is considered an insult and generosity must be encouraged with tax deductions. It seems almost impossible that humans could have created two such different ways of life, but ultimately, sharing is no more part of human nature than hoarding. Unfortunately, societies at both ends of the spectrum of total co-dependence to total independence tend to be intolerant of divergent ways of life. Just as tribes discourage their members from self-aggrandizement at the expense of others, capitalist states discourage those who rely on each other for necessities. Individual achievement is all important, more fundamental than community wellbeing. The argument continues as to whether healthy communities create successful individuals or wealthy individuals revitalize the community.

Living in a large, prosperous state has advantages to living in a small tribe. On average, we live longer, healthier lives, free from constant fear of starvation, injury, and illness. Yet despite the increased wealth and more material goods, food insecurity continues, especially in impoverished communities. Attempts at sharing goods are limited in scope and face many challenges in creating long-term impact. Our societies have grown large and diverse, and in response people create their own communities to which they are committed—generally family members and friends. People continue to share and gift amongst these groups; however the groups are largely comprised of people belonging to the same economic class. In 2013, anthropologists from UC Santa Barbara found in two separate studies that reciprocity in food sharing among humans and other primates is significant. In effect, both humans and their close primate relatives share when it benefits them. This should not be taken only as a direct exchange but also in the more abstract sense. We share with family and friends because we expect that they will share with us in our time of need. In tribes, constant sharing maintains the health of the entire group. Generosity within the tribe is beneficial to the self, and perhaps that mindset can be promoted within large states by creating a sort of food community.

There is no society, primitive, agricultural, or industrialized that has the perfect answer to the question of how to distribute resources, even necessities like food, evenly throughout society. This very superficial discussion of some of the reasons for food sharing is merely a starting place for further discussion of a topic that is extremely important and can be very personal to people who have struggled to get adequate nutrition.

In our own society, what we really want to do is find a way to share the abundance of food that our own agricultural industry creates amongst the over 300 million people in our country, with less emphasis placed on wealth or personal social groups. Certain organizations are already created to do this – food banks and soup kitchens immediately come to mind but there are numerous other organizations that provide free or reduced priced food to their constituents. This is one way to share food amongst the population, but there is something odd about the creation of specific places at which one might share, the industry of generosity. It is also significant that such organizations are often limited in what types of food they can redistribute- canned goods are among the most common- making the food less nutritious and often packed with undesirable additives like sugar and salt.

Agriculture in the United States is a massive industry that creates huge amounts of food, but much of it is in extreme excess (corn, grain) and much is limited. But changing the business of agriculture is perhaps unnecessary- instead of continuing to put the production of food in the hands of someone else, we can all take ownership of our food production and possibly through that increase food availability throughout our communities.

It is significant that in rural areas, where people often grow their own produce and have farm animals like chickens, cows, or goats that food sharing becomes much more common. During harvest seasons, a family will often have more fruit and vegetables than they can eat or preserve- and in towns in which everyone has a farm, selling these goods at high prices (like at the suburban farmer’s market) simply isn’t a feasible plan. The same goes for eggs and milk products. Instead, people give away and exchange food much more often than suburban and urban populations. While it is not an option for all city dwellers to have garden plots, community gardens could be encouraged and become more popular as the benefits become obvious. In suburban areas, small portions of every person’s yard could be dedicated to edible plants and possibly small livestock. Some people would like never produce more than they need or want, while others would produce nothing, and others still would produce excess- but by slowly leveling the supply and demand for currently expensive or hard to get food products, people are encouraged to share food rather than hoard it.

Community gardens and personal food production are just two suggestions for increasing the amount of fresh, healthy food we share throughout our communities. The community garden seems especially promising because they can be created even in urban areas and are by nature a shared space producing shared resources. Through such a space perhaps everyone can practice selflessness and sharing, slowly making it a part of daily life. Hopefully, the benefits of a healthy community can be seen by all those participating, and like a tribe, they will begin to naturally share throughout the group.

Illustration by Will Brant, Republished with permission from Brown Rice Magazine, and from Katie Sharrard.